What is a Game Engine?

Before the revolution of technology, it was very very hard to build a game. The programmer has to write lots of codes to build a game. It was like making a 100 storied building with no machines. You have to carry the bricks and other materials by hand. You have to do all the things manually. Can you imagine how difficult it is to build a 100 storied build with no machine help? It was like that before to develop a game without a game engine.

The game engine is like a machine where most of the things are ready. You just need to put your necessary instructions to the game engine and it will reduce your work by about 50%. There are few popular game engines in the world right now like Unity Game Engine, Unreal Game engine, Cocos2D. Among those Unity is the best and free to use on certain criteria.

You can get unity source codes and modify them according to your wish. If you wish you can also take the benefits of reskinning service to make the difference from others and put them in the store. Today you will see some best unity game source code which you can easily modify by yourself or you can hire some professionals to take reskin service. Here you will get some of the best source codes of unity games.

Game Play: Subway Surfer is one of the most popular games around the world.  It is a platform where users will play the games until they game over. In this game, users have to swipe left / right /up / down and control the player. There will be lots of trains and barriers coming along the way, but the player has to move forward because a policeman will be chasing him.

You can get Subway Surfer Code and modify it according to your wish. This is a 100%  complete unity Game Template and ready to publish. You can see the video of the game below.

Technology: Unity version 2018.4.4 is used to develop this game and the language is c# ( C Sharp). This game is a cross-platform game. You can build the game to Android, Ios, Windows, Web platforms.

For Monetization and to earn money from Admob ads are integrated also in this game In-App purchase is present. So you can earn revenue from Ads also coin purchases.

GamePlay: Online 8 ball multiplayer is an all-time favorite game. In this game, the user will pot the ball with a help of a cue and main ball. All the common 8 ball rules are implemented in this game.

You can get the 100% ready Online 8 ball multiplayer pool game source code. This game is completely developed in the unity game engine. It’s a ready-to-publish game. You can easily reskin the game too.

Technology: Unity version 2018.4.2 is used to develop this game and the language is c# ( C Sharp). This game is a cross-platform game. You can build the game to Android, Ios, Windows, Web platforms.

For Monetization and to earn money from Admob ads are integrated also in this game In-App purchase is present. So you can earn revenue from Ads also coin purchases.

Gameplay: Move The Block Puzzle Game is one of the most challenging games for kids and adults too. In this Block Puzzle Game, you need to move the main block from the left side to the right side to a certain point. There will be lots of blocks. You have to use your brain to move the barrier blocks accordingly and make a path for the main block to move to the right side to a certain place.

There are some modes, Easy, Medium, Hard, Advanced, Expert. Each mode has 100 levels. So all together this Block Puzzle Game Unity source code has 500 different levels.

Technology: This game template Unity 2018.4.23 version was used to build the game but any later version can be used to open this Move the block puzzle game source code. c# ( C Sharp is used as a programming language ). The game is in portrait mode. For monetization, google Admob ads are used. Banner, Intertestial, and Rewarded video ads are integrated into the game.

Gameplay: Save Raccoon by throwing bubbles or challenging evil bubbles. You’ll enjoy great graphics and rewards as you move through the levels. Your mission is to shoot bubbles and match them. Bubbles will defeat Pop to save the baby raccoon. You will have many levels in this game.

Technology: This Bubble Shooter game template is developed in unity 2018.4.23f. c# ( C Sharp )is used as a programming language. A later version of unity can be used to open this game template. This game can be built on Android, ios and windows platforms.

By default, you will get 100 levels in this template. But most exciting thing is that you will get a level editor by which you can make thousands of levels by your desired idea. The Level Editor is so easy and one kind of drag and drop editor.

For Monetization Google Admob ads are integrated into the game. You can also use some other networks because there are cross-platform advertisement plugins are used. You will have Intertestial, Rewarded add unit setup into the game which will maximize your earning from the game. 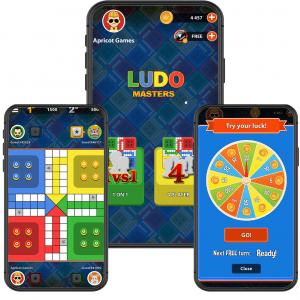 Ludo is a hilarious and fun board game that you can play with your friends and family. This board game is one of the most popular, and it allows you to have a great time with your family members. It is also known by the name Pachisi and is very similar in appearance to Parchis, a Spanish board game.

The game’s game structure has not changed much over the years, but it has remained popular. You can play the game with 2 to 4 people, against the computer, your friends, or against people around the globe.

Technology: This online multiplayer ludo game template is built with unity version 2019.4.22. For Multiplayer networking photon server (PUN Classic) is used. For tracking Players and keep their data Microsoft Azure Playfab is used. Photon and Playfab are easy to set up and they are free to some certain limit.

For Monetization Google Admob is integrated into the game. Interstitial and rewarded ads will be shown in the game. There is also in-app purchasing for monetization. Users can purchase coins, Chat texts, emoticons from the game which will boost up your revenue. 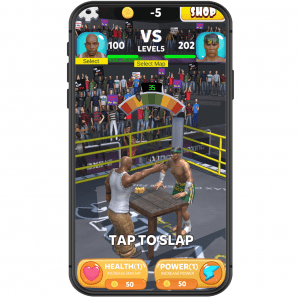 The game’s name is “Slap or be slapped!” This fun and relaxing game will test your timing and strength to see which smacks generate the most power. Your hits are sure to pack a punch. Your opponents will be flying out of the ring after you land the knockout blow. You are going to be amazed at how far you can go in this face-slapping fun tournament. Are you able to unlock your special power…the Golden Fire Fist!
You will find hours of entertainment with this easy-to-learn, yet surprising depth. These characters are ready to be slapped in their faces.

Time to beat the competition and prove that you are the Slap King!

Technology: Unity 2019.4.22f is used to develop this game. For monetization, AdMob is used. You will get Intertesstial and Rewarded video ads on the game. Besides Advertisement, you will get In-App purchase in the game. So you will get all the opportunities to earn money online from games.

This is a real-time online multiplayer shooter game template. In this 2D online multiplayer shooter game, each player will play with the other. They will choose their desired character and start playing the game. There is also Chat Feature by which they can chat with each other before starting the game. There is a lobby feature too. So before starting the match they can also communicate with one another.

On the game, they can send emoticons too. The player who kills most will be the winner. If you get killed then the score will be deducted. So you have to play wisely not to get killed.

Helix jump is one of the most popular games in the world. In this game, the main objective is to go down by breaking the mazes. You need to avoid certain color mazes because those mazes or bricks are not breakable.

you need to swipe left or right to move the ball to left or right. You need to find an appropriate blank space to go down. This is the way to play Helix Jump Game.

Technology: Unity 2018.2.22f is used to develop this game template. Admob is used as a mediation platform.  Banner, Intertestial, and Rewarded ad unit ids are set up in this game. The programming language is c# ( C Sharp) and the game orientation is portrait.

Fight Warrior is a physic-based stickman-fighting game. You can fight against other stickmen to be a legend in stickman fighting and earn amazing rewards in stick fight games. To make yourself stronger and more distinguished from your opponents and to become a stickman legend, you will need to gather the greatest duelist types of stick fight weapons.

Technology: For monetization Google AdMob is used in this game. To build the game unity 2019.2.3 version is used.

Prince runner is an endless game like Temple Run. In this game, you have to save the prince from colliding with any obstacles. You can swipe up to jump. Swipe down to slide, swipe left or right to move the price to the left or to the right side.

You have to collect as many coins as you can so with that coin you can purchase game items like new characters, new dresses, new hats, and also many props. In the game you will get many powerups which will give the price some extra abilities. Don’t miss the powerups while playing the game.

All the games mentioned above are ready to publish. You just need to get the source code and modify the games according to your desire. you can publish the games on Android, Ios, windows, and many other platforms as unity is a cross-platform game engine.

Facebook Twitter Pinterest linkedin Telegram
In the present day, everyone is looking for a source of the best passive income. There are lots of ways to earn money online. But have ...

END_OF_DOCUMENT_TOKEN_TO_BE_REPLACED

Facebook Twitter Pinterest linkedin Telegram
Everyone plays games, regardless of their age. It’s fun, entertaining, and a good way to pass the time. Although games usually don’t of...

END_OF_DOCUMENT_TOKEN_TO_BE_REPLACED

close
Start typing to see products you are looking for.